What are Magnetic Field Gradients and what are their effects?

Published studies, such as Effects of Steady Magnetic Fields on Action Potentials of Sensory Neurons in Vitro suggest that magnetic field gradients generated by the quadrapolar, hexapolar and octapolar arrangements can have a dramatic effect on the firing of action potentials, see “How Q Magnets work”. While common bipolar magnets have very little effect on a nerve cell’s messaging system; the firing of action potentials.

Much of the pioneering research on Quadrapolar magnets was undertaken by Dr Robert Holcomb M.D., PhD and Dr Michael McLean M.D., PhD in the 1990’s, both interviewed in this Australian TV program called Good Medicine…

For those of us without PhD’s in physics, magnetic field gradients are a complex subject. Steep field gradients (also called non-uniform or inhomogeneous fields) are generated close to the edge of a magnet or where alternating poles abutt side-by-side (as opposed to stacked). In fact, the 2003 Nobel Prize in medicine was awarded to two scientists who resolved how to use magnetic field gradients to generate two-dimensional images with the MRI.

You may not be aware, but gradients are integral to life. Galvanotaxis for instance, is the human body’s own electric field gradient used by immune cells to migrate to the site of a wound. The voltage at the wound site becomes more negative and acts as a cathode beacon that attracts the cells that carry out the repairs. So cells follow a gradient, or pathway from a higher voltage to lower voltage.

It turns out, there are many types of gradients that effect cell development and movement. This paper by Zablotskii et al (2018) provides a useful illustration.

Even the Earth’s magnetic field isn’t uniform, but because of its relative size, you would need to travel across continents to detect any meaningful differences within its magnetic field gradient.

The important question that has already been answered…Can static magnets be designed in a way to engineer magnetic field gradients for therapeutic effects?

Magnetic field gradients are determined by the rate of change of the strength of the field over distance. The greater the change, the greater the gradient which increases as opposite poles come closer together. 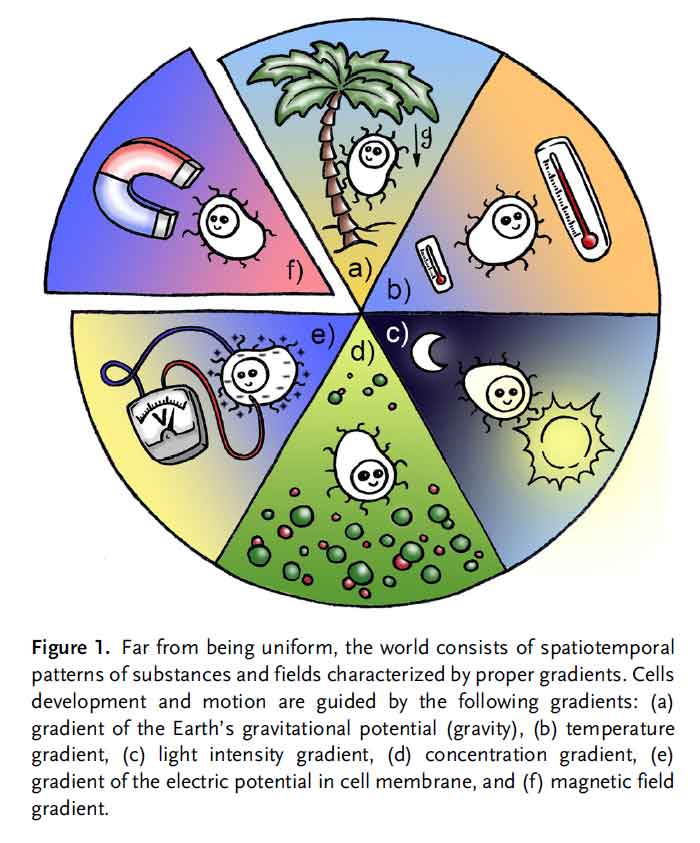 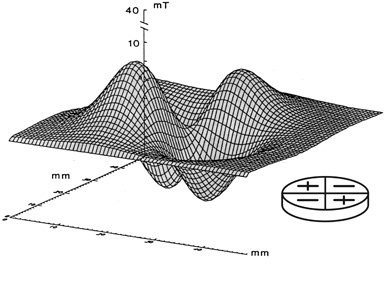 Magnetic field gradients are the forces used in quantum physics that exert a translational force on both a stationary and moving charged particles such as a diamagnetic protein within a cell membrane or Sodium ions (Na+). This is in contrast to a uniform magnetic field such as from a bipolar magnet which exerts zero force on charged particles. The force/gradient relationship is represented by the formula, F = – ∇ P. Force equation Where F is the force,  ∇  is the gradient as a vector quantity and P is the magnetic potential.

Types of gradients are one matter, strength is another. If you’ve ever climbed a hill or dropped a ball down a slope, you have experienced gradients. As can be seen from the images below, the “steeper” the gradient, the greater the effect.

Within the mammalian body there are numerous systems that involve the movement of charged particles, the obvious one is the active and passive transport of ions across the cell membrane through ion channels. Ion channels, particularly sodium channels in nerve cells are responsible for maintaining the resting membrane potential and for eliciting action potentials (the body’s pain signal).

The transport of Sodium (Na+), Potassium (K+) and Calcium (Ca2+) ions across the cell membrane combine to generate the action potential. The research on Quadrapolar magnets suggests that the most likely mechanism is that the magnetic field gradient is altering nerve excitability as a result of changes in membrane permeability to sodium and calcium ions (McLean et al., 1995; Cavopol et al., 1995).

The steep field gradients generated by Quadrapolar magnets has an effect on charged particles that is not shared with the common bipolar magnets. While the mechanism of action is not conclusive, there are clearly additional effects at play. This research paper uses physics, modelling and simulation to evaluate four possible mechanisms…How static magnets might relieve pain. 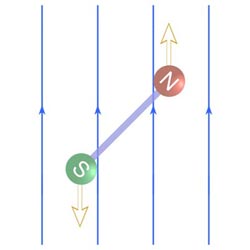 Uniform field does NOT exert translational force on dipole. 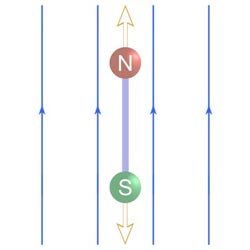 A field gradient is required to exert a translational force on dipole.

The scale to the right (or below on mobile) uses colours to represent the magnetic field gradient, that is the rate of change of the strength of the field over distance – measured in mT/mm.

You can see from the first two samples that we are comparing the QF28-6 magnet that contains the four magnetic poles within the one magnetic body with a competing product called Quadrabloc.

At their peak, the Q Magnet gradient is over 50% steeper than Quadrabloc. Not only is the Q Magnet 50% more effective, but it’s nearly half the size and hence much more comfortable to wear. 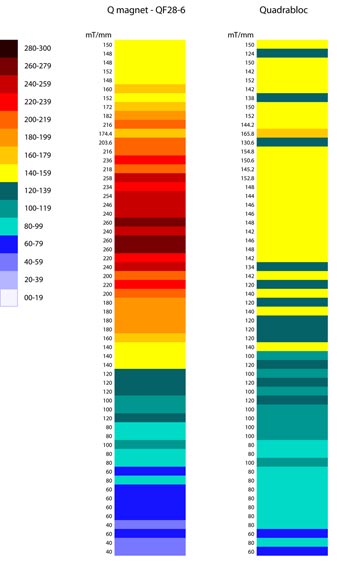 The next two samples are the quadrapolar magnet that was sold through Amway from 1999 to 2006 called MagnaBloc and a single centre charged round disc rare earth bipolar magnet.

You can see that the MagnaBloc device has a relatively flat gradient when compared to the Q Magnet. This is because the magnets contained within MagnaBloc were weaker and only 4mm thick.

Thicker and hence more powerful magnets will produce a steeper gradient. The QF28-6 magnet and magnets contained in the Quadrabloc were 6.0mm and 6.35mm (1/4 inch) thick respectively.

Finally the last sample was a bipolar magnet. The rate of change of the strength of the field never got past the first rung of the colour scale. In fact the rate of change only averaged a tiny 5 mT/mm at the surface of the magnet.

Since we know through the research that it’s not the magnetic field strength, but the field gradient (steepness of the slope of the magnetic field) that is the determining factor in alleviating pain. The Q Magnet is as far as we are aware the most effective therapeutic device for relieving pain on the market today.

You can also learn more about the comparison between Q Magnets and Nikken’s magnetic products at the “Q Magnet/Nikken comparison” page.

See the comparison between different magnets with iron filings on the MRI page.

The design of a magnet is critical for specific applications. Magnetic field gradients are also important to cows, learn more on the why magnet design matters page.

Where else are magnetic field gradients being used in medicine?

Explore all our magnetic therapy products..

Since 2009, Q Magnets have led the way with the world’s most effective magnetic therapy devices.  We provide a 30-day satisfaction guarantee and deliver worldwide.

We are dedicated to support our products with sound advice from experienced health professionals to achieve the best results! 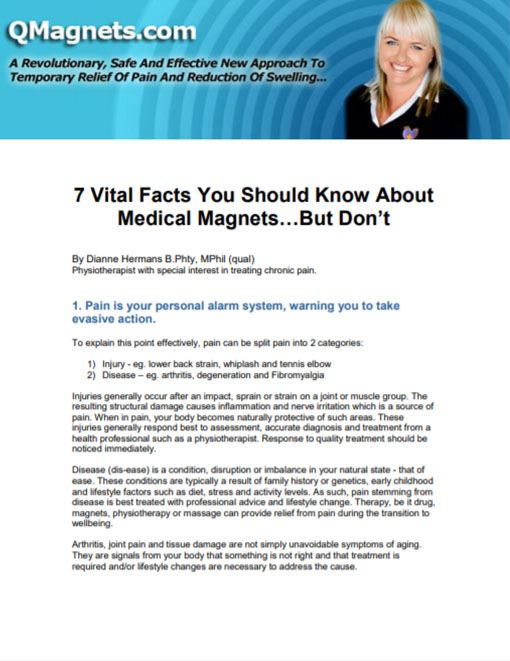 Subscribe to QMagnets.com for latest research, case studies, tips on how to use Q Magnets and get a copy of  ‘7 Questions About Quadrapolar Pain Relief Magnets Answered’

Discover how magnetic field therapy works for natural pain relief for a wide range of painful and/or inflammatory conditions, and why Q Magnets is a real advancement in therapuetic magnetic field technology.